In the fall of 1988, Jenny Gomez transferred from McMenamins Lighthouse Brewpub in Lincoln City to become the first manager of the High Street Brewery & Cafe in Eugene. When the new brewpub opened for business in November, one of Jenny’s first customers was Wally X. It was a homecoming of sorts. The tall, friendly man had been a regular at the Lighthouse until a new job brought him to Eugene. Coming back to 1243 High Street was also a homecoming in another sense for Wally. In the ‘60s, when the place was still a residence, he had lived upstairs. That’s the thing about High Street, its ties to familiar characters and events are remarkable. When you’re there, the phrase, ‘Man, it is a small world!’ is never far from your lips. 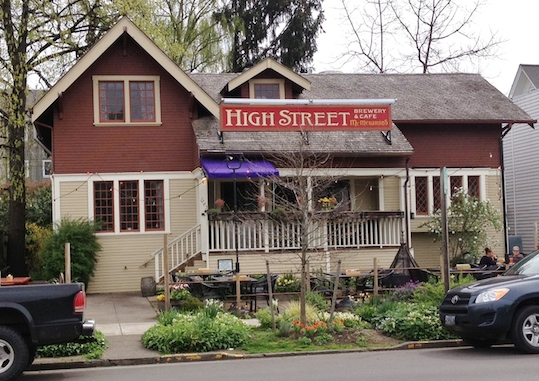 The bungalow-style house was built sometime between 1902 and 1912 and may date to 1910, the year of the German-language newspapers found in the walls of the house during a renovation project. The property’s original residents are not yet known, but it may have been the Yoders, a German-Swiss family, who owned the place for a half century before selling it in 1965.

Myrna Yoder, one of the McMenamins artists who painted the fun, evocative figures and details adorning the pub, has always felt an affinity for the place. Now she’s thinking perhaps she’s picked up on a family vibe. The artist’s roots are in the central part of the Willamette Valley, but she says it’s not unlikely that a branch of her family moved into Eugene after the turn of the century and could be the same Yoders who lived at the High Street home for so long.

Over the years, 1243 High was home to many folks. While it was often identified as a single family dwelling prior to World War II, after the war, there were always one or two boarders living there as well. Numerous University of Oregon students made the place a temporary home for a term or two before moving elsewhere. In 1967, one student, Christine Bettis and her husband, Stan, moved in downstairs, where they spent the next three years. While Christine attended classes, Stan, an accomplished freelance writer and photographer, worked on a book about one of Eugene’s most celebrated and endearing institutions, the public market. Stan Bettis’ Market Days: An Informal History of the Eugene Producer’s Public Market was published in 1969.

For part of the time that the Bettises lived on the first floor, Wally X lived upstairs. He said the place was more or less a flop house by that time. Wally took over the north half of the second floor from two friends who had been living there during the previous year. They were “sometime students” who were among the earliest of Eugene’s then small hippie culture- local pioneers with recreational marijuana and LSD experimentation and had direct connections to the best “chemists” down in San Francisco, including Stanley Owsley, the Grateful Dead’s personal acid dispenser.

Of his High Street days, Wally remembers the beauty and completeness of seeing sunrises through the apple tree that still grows out back and sunsets through a cherry tree that stood in the front yard. He also recalls music was a constant part of life there. He and friends listened to lots of folk and jazz records–Tom Rush, Buffy Sainte-Marie, Phil Ochs, Charles Mingus, Thelonius Monk. “Once every hour, there was a music eruption,” he recalled.

Music and Grateful connections continued at High Street after McMenamins reinterpreted the place as a pub. The vintage Bay-Area concert posters and funky artistic meanderings painted on the walls allude to that, but it goes deeper. Dave Young, who worked at High Street for a number of years, was part of the great Eugene band called the Palace Meat Market. Young and the band opened for the Dead when they played at Eugene (legend has it that Owsley was at the show dressed in Santa suit giving away some trippy presents). 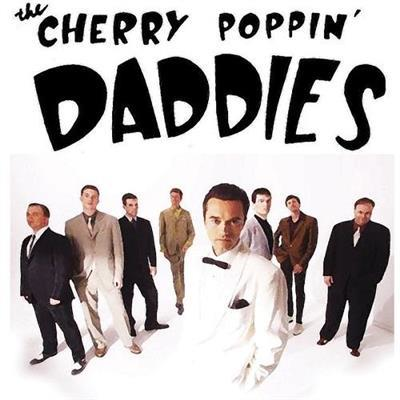 Another local musician who, with his band mates, achieved superstardom, was once a High Street pubster. Dan Schmid, bass player for the Cherry Poppin’ Daddies, quit the band and worked at High Street for about six years. He rejoined just as the swing thing was starting to generate a lot of interest in the 1990s and helped the Daddies lead the wave. In between tours, when the Daddies returned home to Eugene, Dan stopped in to see friends at High Street.

Next time you come in, you may not run into Dan Schmid or other notable characters, but you’re bound to feel a comforting familiarity among the people gathered and the place. That’s the thing about High Street–and has been for a long time!